Select individual students to read aloud each of the quotations below. Then ask the class the questions that follow as a basis for a classroom conversation.

“The bosom of America is open to receive not only the Opulent and respected Stranger, but the oppressed and persecuted of all Nations and Religions; whom we shall welcome to a participation of all our rights and privileges…”

“Everywhere immigrants have enriched and strengthened the fabric of American life.”
“We are a nation of immigrants.”

“Nearly all Americans have ancestors who braved the oceans – liberty-loving risk takers in search of an ideal… Immigration is not just a link to America’s past; it’s also a bridge to America’s future.”

“We are and always will be a nation of immigrants.”

To the teacher: It is important at this stage to note to the class that immigration is a sensitive contemporary issue. We suggest you address this prior to next steps, saying something to the students such as, “Today we’re going to be discussing immigration, a topic that is part of our current conversation as a country, and is sometimes tied to racism and prejudice. Let’s keep that in mind as we start and take care to consider the subject thoughtfully and critically. Just as important to note is that the growth patterns of the United States are linked to demographic changes beyond immigration, including the forced migrations of enslaved people to the U.S. in the 18th and 19th Centuries.”

Give students Handout #1, which includes the cover image of John F. Kennedy’s book A Nation of Immigrants and an excerpt from Emma Lazarus’s poem “The New Colossus.” After they’ve had a chance to consider the image and read the poem to themselves, ask the questions that follow:

To the teacher: Inform the class that the National Park Service refers to the Statue of Liberty as the following: “‘The Immigrant’s Statue’ . . . a reassuring sign that [immigrants] had arrived in the land of their dreams.”

Making Connections: What are your family’s roots? Do you have an immigrant experience in your family history? Were your ancestors enslaved people? You might have an “immigrant story” yourself. If you recently traveled to the U.S. from another country, or as a “migrant” from another region within the country, reflect on what has been positive and what has been challenging about that experience. Have a conversation with your parent, another relative or a neighbor, asking them about their “immigrant story.” Bring one of these to share with the class.

Have students break into small groups. Give each group a copy of Handout #2, which includes six political cartoons from the late 19th and early 20th Centuries, along with questions for each group to answer.

To the teacher: Be sure to review the political cartoons in advance, and be prepared to inform your students that some of the content is offensive in nature. Establish Ground Rules for discussing this sensitive material by asking your students what they feel are the actions and behaviors that let them know the classroom is a safe place to share their thoughts. Make sure that your students all agree on these Ground Rules before continuing with the sensitive material. As the student groups review the cartoons, walk between the groups and help them to understand that the views of immigration introduced thus far represent two extremes: idealized, as in the presidential quotes, and prejudiced, as in the political cartoons.

Making Connections: What are some of the ways a person can stand up to prejudice? Have you experienced any examples of a person or group of people being branded as “outsiders” and treated in the way the immigrants are in the political cartoons? How could you help in such a situation?

After your group has had a chance to study the contents, appoint someone to write down your group’s responses to the following questions:

Present the graph U.S. Immigration Flows By Country and the map of Europe to the class. Ask students to answer the questions that follow. 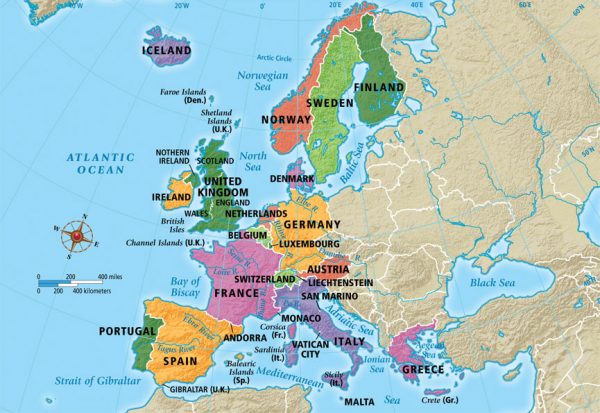